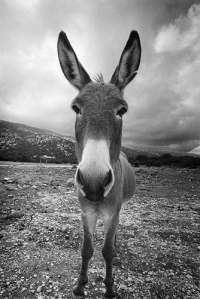 There is a story in the Bible where a donkey spoke and saved a man’s life. (Numbers 22)

God is able to use any one or any thing at any time to see His purposes fulfilled.

One of the people I spoke with was less than polite and, quite frankly, was acting like a stubborn donkey. 😉

I wasn’t able to get in when I wanted to and so I called and a left a message with the one who was expecting me and left. A short time later, I received a call from this person and they asked me to come back to see them. I turned around and made may way back to their location. This time, everything went smoothly and I got right in.

It turned out that when I arrived was the exact right time for me to be there. God had orchestrated the delay and detour I went through. I didn’t understand it at the moment, but once I got a better look at the bigger picture it became clear.

In the story in Numbers 22 in the Bible, Balaam got quite frustrated with the donkey and started to beat it. Even after she started speaking he argued with her and threatened to kill her. (Not sure killing a talking animal is the best decision to make…) But she saw what he couldn’t and saved his life and fulfilled God’s purposes.

Sometimes we run into donkeys in our lives and they are frustrating to deal with. Sometimes they are being used by God to bring about His timing and purpose.

Hopefully, when that happens we won’t respond as Balaam did, but instead we will recognize what God is doing.

The point is: when we walk with God, we have to walk with eyes open to what He is doing so that we may see His purposes, even when He is using a donkey.

The views, opinions, and musings given by me in this blog are not meant, in any way, to be presented as those of any organization or group. This is my personal blog and everything in it is from me and only represents what is coming from inside my mind, which is pretty scary in itself.